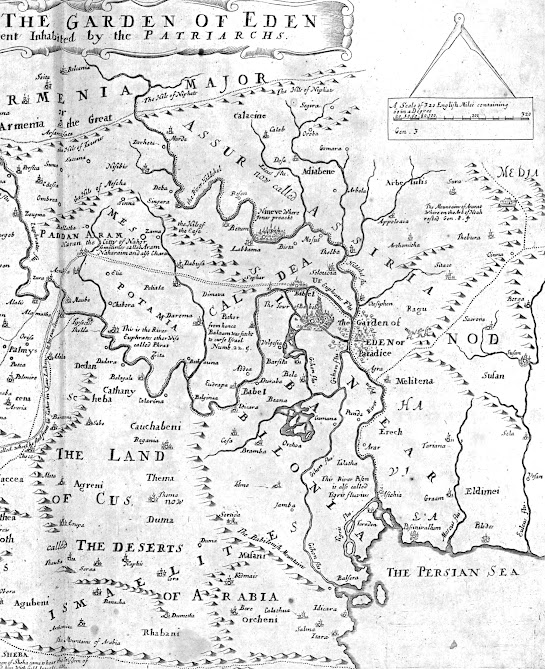 The Garden of Eden is on a map so it must be real, right?

In the 6,000 years or so since civilization got rolling there has been a lot written about the Biblical six-day creation. The Bible actually gives us two somewhat-contradictory stories in terms of when God did what.

Those stories, though, established the entire flow of our society, of our calendar. Six days of work, one day of rest = one week. The very foundational idea of original sin came out of that, as well.

Books have been written about all the nuances of how this six-day creation took place and what it meant. There has been speculation about Adam and Eve's motivation. Was the serpent threatening Eve? Was Adam being a coward in eating the apple instead of kicking the serpent's butt? And maybe it wasn't an apple at all, the Bible doesn't specify. Eve could have bit a big chunk out of the banana of transgression. (Sorry, I just like how that sounds.)

Why is it that we aren't told to just read the Bible through once and then believe ourselves to know everything of religious importance? Why is it that you can hear the same passage every year of your life and get something new out of it every time?

The word of God is so complex and meaty and full of layers and symbolism. It seems like nothing God ever does has only one meaning.

So all that is background for this one thought. "Evolution - Why, God?" I haven't heard any theologians explain why on earth God would tell us twice that He made the world in this one way, full of beauty and meaning, and then turn around, and without telling us anything, make it in a completely different way.  And then Jesus comes to teach us all about God but doesn't bother to mention this little discrepancy.

Billions of years to create everything. What is the symbolism of that? Where are the layers of Truth stacking upon each other, pointing to future events and past, that we see in everything else God does?

I think the theologian who tells us "why" should be the next Doctor of the Church.