Halloween, Minecraft, and the Mushification of Hell 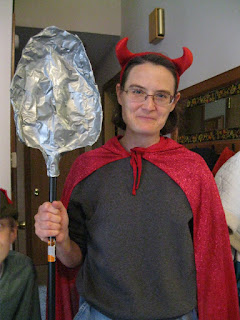 This is me many years ago dressed like Dilbert cartoon character "Phil, Prince of Insufficient Light." Note my schnazzy homemade pitchspoon.  Maybe you can tell I do not like Halloween.

My husband won’t let me keep a Styrofoam gravestone in our front yard year-round with the words “Momento Mori” (Latin for “Remember you must die”) on it. So I am thinking he also will not let me decorate the garage door for Halloween with blown up posters of the painting masters’ works on hell.

I searched for some online and they are pretty horrifying and graphic. Also, everyone is naked, which does not work well during Trick or Treat.

Actually, in my draft of this blog post, I included the most benign of these old paintings of hell and my family told me they were too disturbing to include.

I recently learned that there was a somewhat controversial hell-like region of the videogame Minecraft called “the Nether.” In my experience, that game is pretty tame, so would this be problematic? I checked it out. The Minecraft Nether has lots of comfortable space to move around. There are fire squares and monsters  like “zombie pigmen” and “chicken jockeys” that, with a little practice and a few official cheats, you can easily avoid.

In my opinion, the problem with this, is that unlike actual hell, the Nether is a place you choose to go to and can leave whenever you want, assuming you find where you left your portal. It’s not that bad. Monsters try to kill you, but they do that in “the Overworld,” too.

Returning to Halloween, representations of devils can be scary, but then the mask is just removed. There are also all these cutesy, sexy, devil costumes for women, which at least are closer to how the painters saw hell in terms of nudity.

If Satan’s best and most powerful tool to nab souls is the idea that he and hell do not exist (see C.S. Lewis’ classic book, The Screwtape Letters,) then convincing people that hell isn’t so bad has to be his second best.
Posted by Joyce at 7:06 PM