Moving Up To a "Five" 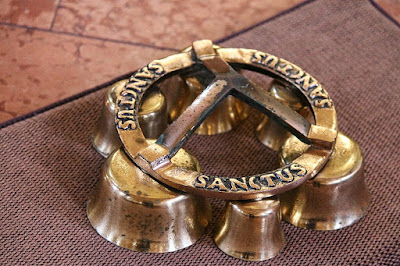 In my younger days I worked at a soup kitchen in New York City. Sometimes, full of youthful fearlessness, I would help the guys with the line outside. That involved standing out in the heat or cold with the homeless people who were waiting to go inside for their meal and trying to keep things calm, friendly and orderly.


Far from being dead weight out there, maybe because I was female, I noticed that I could make the line flow in the direction I wanted, around corners and against a wall,  just by standing strategically in various places near the line. This worked because of the natural distance we keep from other people. It was pretty foolproof and required no words or argument.


Bringing that experience to the current Catholic Church crisis, I realize that, again, simple things I do with my body can have a big impact on those around me. No words or argument needed.


On the modernist “zero” to traditionalist “ten” scale, my parish is probably a “four.” There is nothing blatantly offensive going on but the predominant temperature is definitely luke warm and no one has much to say about sin or the afterlife or sexual ethics.


Many of my fellow parishioners are losing their faith in the hierarchy and in the sacraments. Even if the hierarchy is a mess, as it currently is, Eucharist should be enough to keep people from leaving the Church. So why isn’t it? Maybe it is because we are showing less respect for the Real Presence in our liturgy.


Here are some simple things I have been doing to silently encourage others to respect and better believe in the True Presence in their midst:


My challenge now during Advent is to try to kneel in my pew for five minutes after Sunday Masses. This sounds so small but it is hard and I believe it is powerful for others to see. I usually have after-Mass business to conduct with other people there that are in the process of leaving. The church is abuzz with chatter at that time. Even though it hasn’t been a very prayerful exercise so far (I need to learn to do it without looking at my watch) but it is a deliberate call to fellow parishioners to show more deserved respect for Jesus, still-present in our bodies. A call to shut up, or at least take the conversations into the narthex so others can pray if they want.


I have been adding these things one at a time over the last few years. Slowly and casually. The point is not to play the holier-than-thou game.


In addition, my homeschooled son started altar serving at most of the daily Masses. At one point someone found some bells in a closet and he asked the priest if he could ring them at daily Mass, which was approved over some objections from parishioners. Then he served for some feast day Masses and rang the bells for a different crowd and other altar servers started doing it too. A year later, the bells now are a normal part of all our Masses and when they aren’t rung it feels funny.


These are small things but, hey, maybe in time they can help our parish move up to a “five.”
Posted by Joyce at 10:33 PM