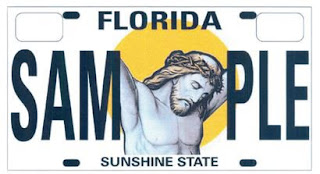 This story from Florida struck me as interesting. There is discussion about having an "I Believe" license plate you can buy, the first overtly religious in the nation. That would be in addition to over 100 other special interest license plates available in Florida at this time. It looks like the plate design with Jesus on the cross is not likely to become available. A more generic cross with a stained glass window is making its way better through the system, with lots of obligatory argument and fuss, of course. (So we are looking at a Protestant plate, as opposed to the somewhat more gorey Catholic version.)

Speaking of Florida, I was surprised to hear that previous governor, Jeb Bush, had gone through a special ceremony to consecrate Florida to the Immaculate Heart of Mary (article pasted below). You know with all the financial, population and climate pressures on Florida, this sure can't hurt. Definitely interesting. This is not recent news. I have no idea how long ago the consecration took place.

Sources in Tallahassee and at the bishop's office have confirmed that the state of Florida was recently consecrated to the Immaculate Heart of Mary in a quiet, almost secret Mass celebrated by Most Reverend John H. Ricard, bishop of the Pensacola-Tallahassee diocese. The solemn event was attended by Governor Jeb Bush and his wife Columba. It reportedly took place at Blessed Sacrament Church in Tallahassee with just 24 in attendance."It was a very quiet activity," notes Tina Easter, the bishop's secretary. "It was quiet because of the governor's involvement. It was certainly not a photo-op." According to one woman who attended, the Mass occurred last May and was the length of a normal Sunday liturgy, with a special consecration read and a life-sized image of the Guadalupe Virgin placed in the church for the occasion. According to reports, both Governor and Mrs. Bush have visited the famous shrine at Guadalupe near Mexico City, where Mary appeared to St. Juan Diego. Mrs. Bush, a Mexican-American, recently attended the beatification of Mother Teresa and jubilee for John Paul II at the Vatican. She is known to be devout and has been seen in the chapel of the Tallahassee church. Consecration of a nation or area is considered a powerful means of protection. The famous Fatima appearance included a request for the consecration of Russia. The state has also been consecrated to the Sacred Heart of Jesus.


Update: 5/10/2019. Here is the current list of Florida specialty plates. I don't see anything religious on the list at all. Some interesting plates are "Choose Life," "Family First," "Family Values," and "Freemasonry." FREEMASONRY ??? Why would they even want to announce that they are in a secret society? Good grief.
Posted by Joyce at 10:47 AM